If flexibility and crisp audio are the things you value the most, look no further. This cute microphone offers professional sound recording quality at a fair price. We’ll take a look at what it’s capable of in this Tula mic review.

Best for: Podcasts and conference calls

The mastermind behind this portable microphone is David Brown, a longtime musician, songwriter, and founder of the Soyuz Microphones brand. He founded the Tula company in response to the rapid growth of podcasts and the surge of people working from home. As a result, the Tula Microphone was released in 2020 as a single-solution recording device.

It’s a pocket-size mic with great recording capabilities for its dimensions. It makes every sound audible by implementing noise-cancellation technology and two sensitive audio capsules. Its size and battery make it the perfect solution for podcasters, vloggers, or anyone in need of a portable recording device.

We all like compact and useful gadgets. However, size affects performance sometimes. It’s this the case here too?

Let’s see what I found while testing it in this Tula mic review. 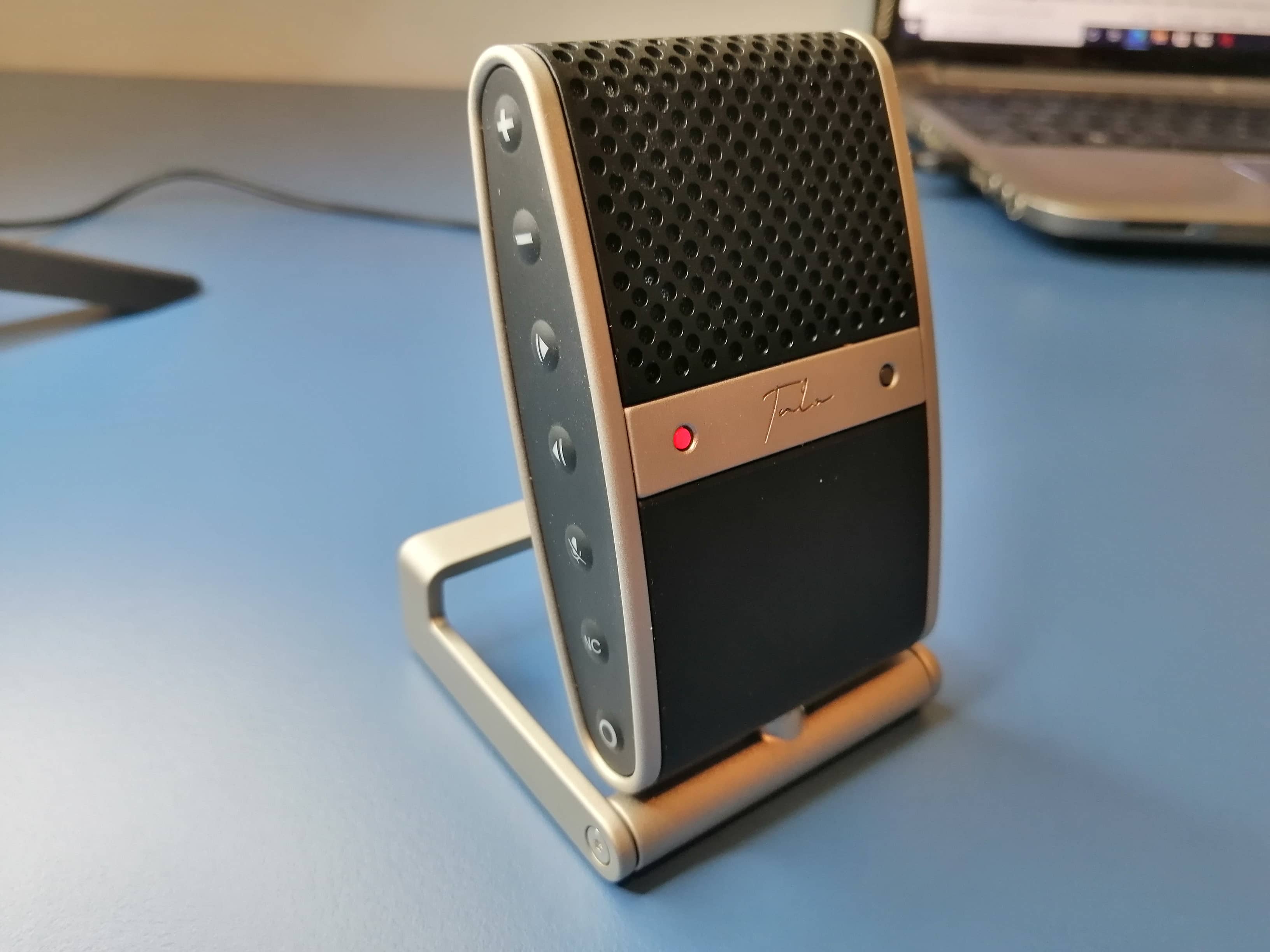 The first thing that made an impression on me while doing this microphone review was its crisp and clear audio. It’s thanks to the two condenser capsules and frequency levels that stretch from 50 Hz to 20 kHz.

I did several tests using both the unidirectional and omnidirectional capsules, and the results were great. The sound intensity was perfect no matter the distance from the microphone or from which side.

However, I noticed the proximity effect occurring, which was not that big of a deal. Also, I heard a lot of echo sounds in the recordings with the omnidirectional capsule. The recording sound was clear though, and that ASMR feeling hit me hard.

If you want crisp audio, you need a decent mic. Therefore, this portable USB microphone relies on some serious technology inside it.

Its two polar patterns are:

The mic also records audio at 16-bit/48 kHz, which is the standard broadcast quality of a media. It also features a Burr Brown amplifier and TI audio codecs that ensure the fidelity of the audio signal. Hence, it provides professional quality in a wide variety of situations.

Other specs worth mentioning are the battery and the 3.5mm headphone input.

It is equipped with a 3.7-volts 700 mAh lithium-ion rechargeable battery. A lot of Tula reviews state that it covers 12 hours of recording. However, in reality, it lasts about 10-11 hours, which is actually pretty good.

It also has a 3.5mm input, which is very useful for monitoring the latency. Also, when you are in headphone mode, you can control the gain from the Volume Up/Down buttons. 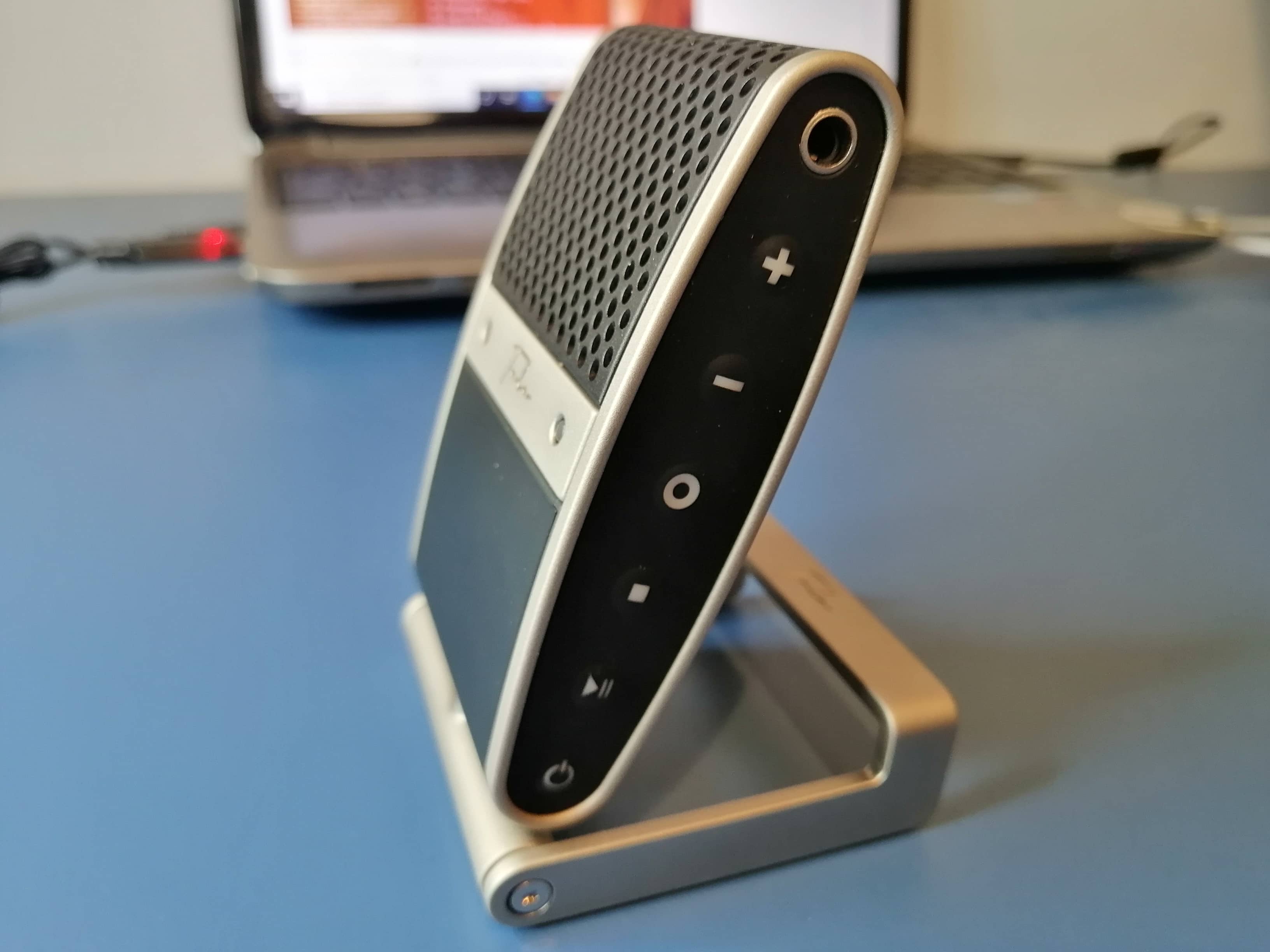 Although it would’ve been amazing to have an SD slot, the mic only has 8 GB of internal storage. This makes up for approximately 14 hours of recording time.

In addition to being battery-powered, its dimensions and weight are the things that make it a portable microphone recorder, in the first place.

It weighs 0.35 pounds and its dimensions are:

The Tula microphone has an incorporated noise-reduction algorithm by partner software developer Klevgrand.

It is an effective way to remove unnecessary sounds from your recordings. However, don’t expect that it will fix everything. Although it will clear most of the buzz, it can’t help you if working in a very noisy environment or outdoors.

It works best by adapting to the environment. What I mean by this is that in order to work effectively, it needs time to analyze the extra sounds. I’ve tested it with a fan turned on and an open window, and it worked fine. It ignored both the fan and the traffic noise.

Another good feature of the noise-reduction option is that it saves both the raw and the edited file. So, you can easily choose the one you like the most.

The Tula microphones are built extremely well. Its design incorporates the perfect balance between modern and old-fashioned aesthetics. It looks like an old studio mic, but it’s packed with top-notch modern technology. 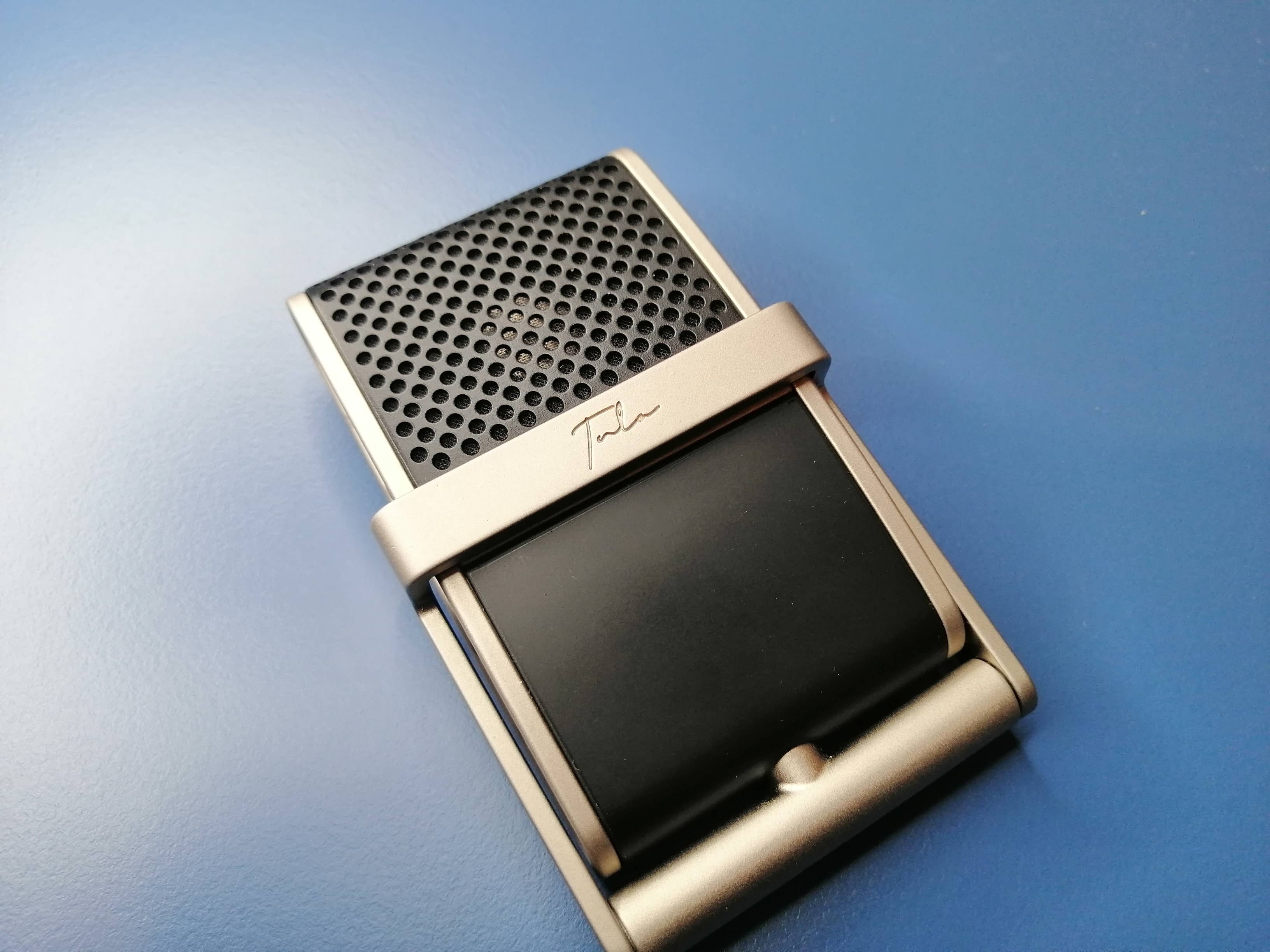 It’s got decent durability too, thanks to its metal body. However, it is not built like a submarine - never to be opened. Its parts are snapped and screwed together, rather than being glued to each other like in most modern tech. This makes the mic easily repairable.

Having a good mic is a useful thing, but not being able to pair it with your devices is not so great.

Luckily, the Tula mic is compatible with most devices.

You can easily connect it to a Mac or Windows PC, or an Android or iOS device. It comes with a USB C to USB A cable, while iOS requires an adapter. Also, due to its 3.5mm input, you can use it with any TRRS lavalier microphone. Even more, due to its various connectivity methods, you can use it to record with a digital audio workstation.

Although the mic is portable, it ships with an integrated stand, which you can easily set up on your desk. However, don’t worry if you already have one. You can easily attach the mic to any threaded stand with commensurate connections.

Price is a key aspect that we look after when we buy anything. Therefore we will cover it as we always do in our mic reviews.

We all know that every innovation is costly. However, that’s not quite applicable here.

For $229, you can get the best portable and innovative mic on the market with a 1-year warranty. The price is reasonable, considering the device’s features and specs.

Even more, you have a 30-day period to return the product if you are not satisfied, and you don’t owe a penny. Keep in mind that damaged products cannot be returned, and you must present the invoice or receipt.

Shipment costs depend on your location. There are two fulfillment centers: one in Spain, serving the eastern hemisphere, and one in the US, serving the western.

What I really like about this condenser microphone is its versatility. Whether you need to record on the go or in a quiet, cozy room, it supports both. However, we’ve found out already in this USB microphone review, its noise-cancellation feature is not so great for outdoor recordings. However, the mic compensates with its perfect sensitivity and sound intensity, which makes every sound audible.

So, in conclusion of this Tula mic review, this microphone is a great bargain. For a fair price, you will receive a nearly professional device that you can rely on for every occasion.

Techjury.net's manager. Deyan has been fascinated by technology his whole life. From the first Tetris game all the way to Falcon Heavy. Working for TechJury is like a dream come true, combining both his passions – writing and technology. In his free time (which is pretty scarce, thanks to his three kids), Deyan enjoys traveling and exploring new places. Always with a few chargers and a couple of gadgets in the backpack. He makes mean dizzying Island Paradise cocktails too.