Sometimes, finding a great Bluetooth speaker can be difficult. But today, we take a look at the GravaStar Mars Pro - a device that holds nothing back quality-wise. Is it worth the price? Find out in this GravaStar speaker review.

Best for: Low and mid-ranges

Nowadays, having a Bluetooth speaker is almost necessary for any hangout.

But finding the right one? That can be finicky.

Enter the GravaStar Mars Pro. This striking metal unit looks like something straight out of a sci-fi film and is sure to draw attention. It stands on three legs like a tripod, has a 2.5” speaker, and lasts a respectable 15 hours.

Oh, and it can get loud.

The Mars Pro Bluetooth speaker is meant to be a successor to the standard GravaStar Mars model. It features a higher-end subwoofer, updated design, and fancy RGB ambient lights for an added atmosphere. 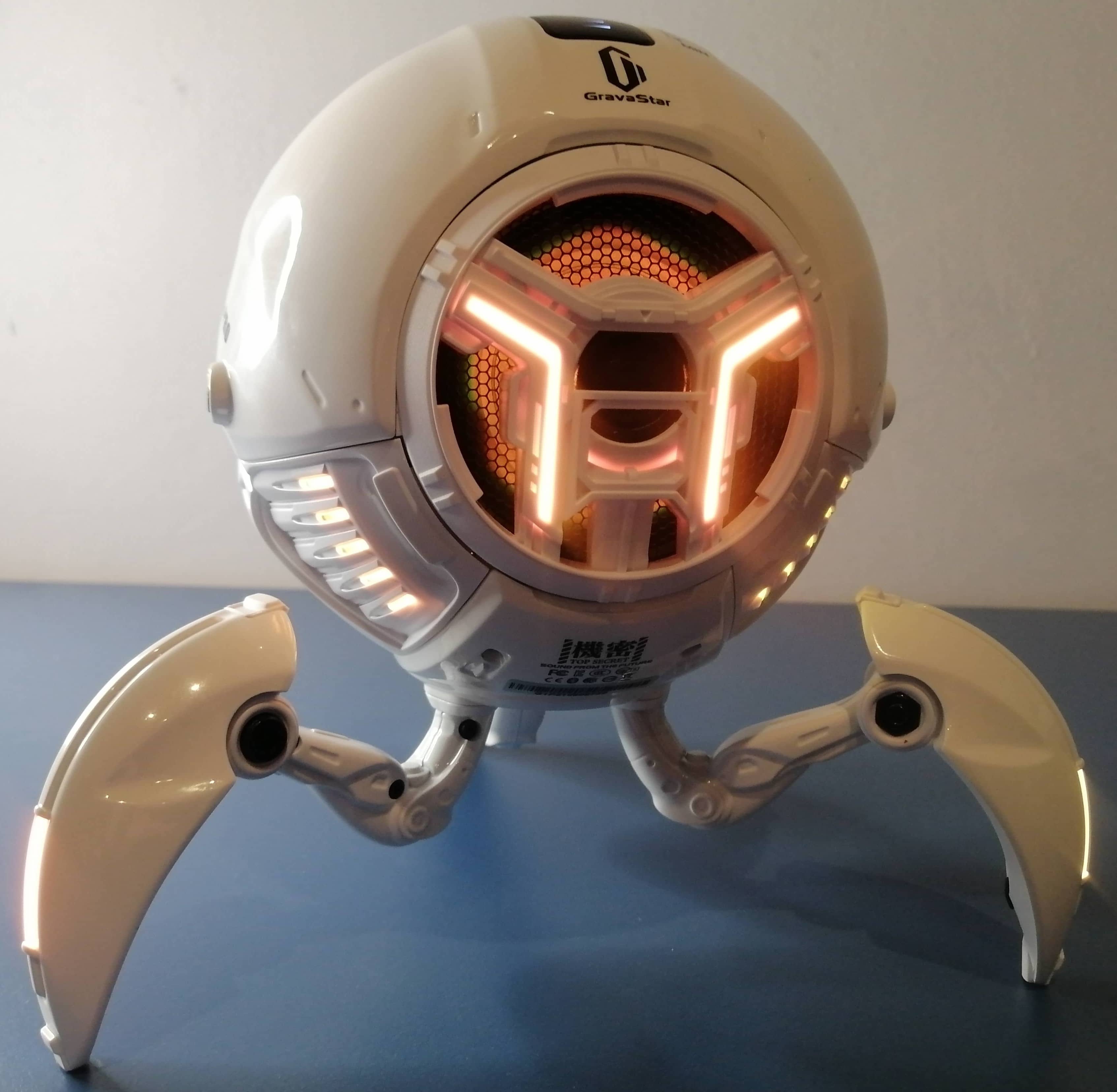 One thing is for sure:

This specimen definitely makes an extraordinary first impression. But what are its offerings, and most importantly - is it worth your money?

So, is it truly as impressive as it looks? The Mars Pro is a fairly high-end Bluetooth unit, this much is evident by the frame construction and overall presentation.

Let’s take a closer look at the features of the GravaStar speaker:

The first thing you’ll immediately notice about the device, aside from its unusual design, is the sturdy construction. The body is made out of zinc alloy which gives the speaker a very premium feel. It is also heavy, much more so than most speakers.

The metal frame allows soundwaves to propagate more freely throughout the body, which contributes to its loudness.

As I’m sure you’ve noticed, the Mars speaker stands on three legs.

This design acts as a shock absorber and guarantees more overall stability. The device can be placed on any flat surface and it will stay firmly in place.

While the speaker's design is impressive, it is not the most practical for transporting.

The three legs can fold up, allowing you to carry it around more practically. But at its core, it’s still a large metal ball with three tips spiking out of it.

It’s pretty clear that the GravaStar speaker is intended to be primarily a desk accessory. And as such it’s honestly great.

Battery life is important for any Bluetooth device.

So, how does the Mars Pro fare?

Well, after a full charge, it lasts about fifteen hours of use. This is pretty adequate by itself. However, I can’t help but feel like this is a bit of a downgrade. With the standard Mars model lasting five hours more on average, it kind of takes away the meaning of “Pro.”

There is a charging station which is sold separately for $60. But for the purposes of this Mars Pro review, we are going to primarily focus on the speaker itself.

Fortunately, there is a USB-C port at the bottom of the unit. The device itself also ships with a USB Type-A to Type-C right angle adapter. Since the body is a reasonable distance off the surface, you can charge it without having to pick it up.

But be forewarned: the unit does not come with a power adapter in the box. Still, you can easily charge it via your laptop, computer, or a 5V phone charger.

There are two ways to connect the Mars speaker.

The first one is obviously through Bluetooth. The Mars Pro supports Bluetooth 5.0, which is among the latest iterations of the technology. This allows the speaker to maintain a more stable connection with your devices and over longer distances.

In fact, the official website lists the maximum transmission range as 10 meters, which is impressive. However, when I tested it, I managed to keep the connection stable even further.

The second method of connection is via cable.

The speaker itself does not have a 3.5mm audio jack. Instead, it comes with a USB-C to 3.5mm adapter with which you can connect your phone, for example.

Now, I know omitting a headphone jack is kind of a trend nowadays, but it’s still a letdown. This means you cannot use the speaker while charging it unless you use Bluetooth or the GravaStar charging base.

One really cool thing about the Mars Pro is its support for TWS.

Unsure what that is?

TWS stands for True Wireless Stereo. It is a technology that Bluetooth earbuds use to achieve synchronicity between each other.

Well, if you have two GravaStar speakers, they can do the same.

Two separate units can connect via TWS. Then, one speaker will play the right audio channel, while the other one will play the left channel. So you can use them as a more traditional audio system, of sorts.

It wouldn’t be a Mars Pro review if I didn’t talk about the visually impressive ambient lights all around the body.

In fact, they are one of the main features distinguishing the Pro variant from the standard model.

There are six dynamic RGB lights situated around the speaker and the legs that can all change color. The system can be controlled via buttons on the body. You can either set the lights to a static color or have them gradually change over time.

There is also an LED volume control, which is touch-sensitive and looks super stylish. 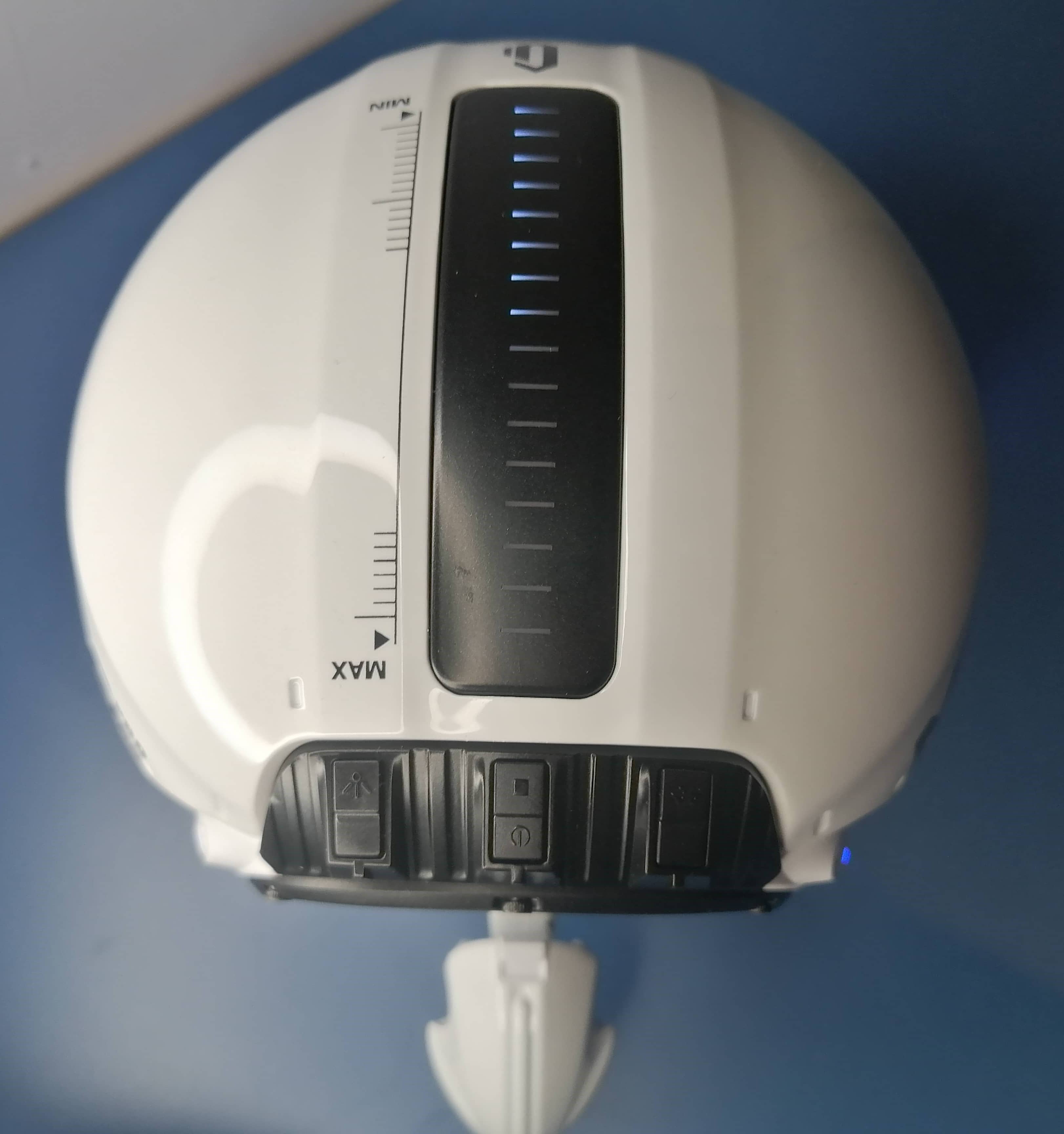 So throughout this GravaStar speaker review, we discussed some of the main characteristics like connectivity and the build quality.

But how does it actually sound?

The Mars Pro features a 2.5” full-range speaker, an improvement over the original. It also has a dedicated 1” tweeter for high frequencies. In theory, this should cover both the highs and the lows of the audio spectrum.

The GravaStar speakers can really fill up a room. But the great thing about it is that even at its loudest, you’ll experience minimal sound distortion. Also, even if you set it to a quieter volume, the unit can still output substantial bass.

Earlier, I did say “in theory,” the sound system should capture the entire audio spectrum.

The Mars Pro is really meant more for bass than anything else to tell you the truth. And to its credit, it does succeed on that front. 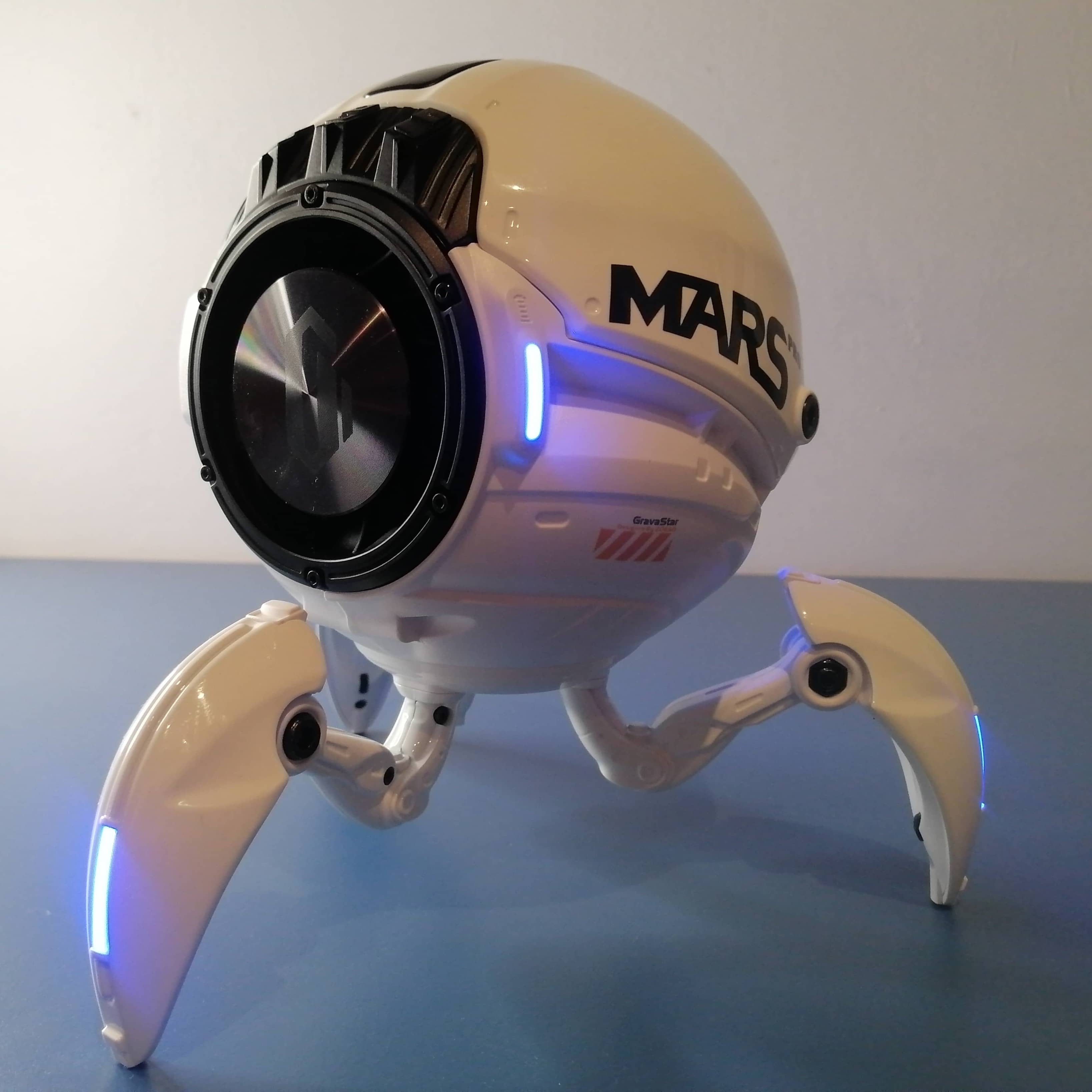 But the higher frequencies? They tend to get drowned out, especially at higher volume. So if you are looking for a more mellow sound, the Mars Pro Bluetooth speaker is not the best candidate.

But if you want a loud, bass-heavy sound that really sounds premium, this model is perfect for EDM parties or gaming setups.

In a nutshell - what is the GravaStar Mars Pro?

It is a high-end, high-performance Bluetooth speaker that makes one hell of a first impression. Its sci-fi design and zinc alloy metal body adorned with RGB lights are sure to attract looks.

It might not be the most portable Bluetooth speaker out there, sure. But its tripod-like frame and nearly 5.5 lbs of weight make for an incredibly stable and shock-resistant device. It also supports Bluetooth 5.0, which gives it increased range capabilities and stronger connectivity.

But it’s not perfect.

It lacks some basic features like a power adapter in the box or a 3.5mm audio jack. Furthermore, it tends to favor low-end frequencies, causing the highs to get lost in the mix. But what it lacks in versatility, it more than makes up for in grunt power.

So to wrap up our GravaStar speaker review - who is this product for?

This speaker does better than most by blasting bass-heavy music at high volumes. So if this sounds like your thing, the Mars Pro is a total no-brainer of a purchase.

My fascination with technology began from quite an early age thanks to computers and video games. Nowadays, I love anything related to music production and astronomy. Coincidentally (or is it?), both of those have a great deal to do with tech. Honestly, most of the stuff that can be accomplished with modern electronics kind of seems like magic to me. This is why I feel this strong need to constantly learn more about it and talk about it, almost to the detriment of others.